People and Places Discussed and Pictured in Chapter 33 of:

John Gould Veitch and Henry Veitch were two of the most famous planstmen of Victorian and Edwardian times.   They were particularly interested in flowering trees and shrubs, and displayed a fine selection in their nurseries at Coombe Wood, Kingstorn-upon-Thames, on land that was leased from Sir Arthur Paget, who owned the adjacent Warren House – as explained in Chapter 32.   Part of the nursery was laid out as a Japanese-style water garden, consisting of a series of small lakes, linked by streams, that were fed by a number of underground springs.

The land was taken back by Sir Arthur Paget in 1913, when the lease expired, and they were included in the major re-landscaping project done by James Pulham and Son.   These gardens extend over some three acres in quite a steep valley, and abound with acers, including the ‘pocket handkerchief tree’ and many other rare species.   There are welcoming Japanese gateways, rocky streams and gentle cascades, pathways through rocky clefts, Japanese bridges, and even a Japanese Teahouse. 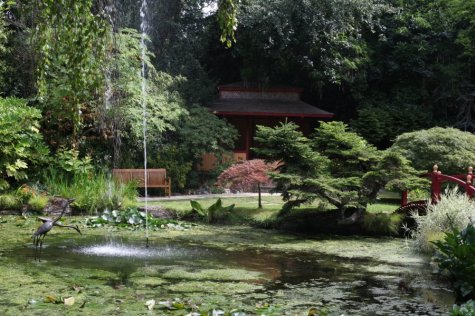 Japanese Water Garden at ‘The Watergardens’   (Photo be Jenny Lilly)

These gardens were sold off when the new Warren House Conference Centre was established in 1988, and two blocks of private apartments were built on the land where the Coombe Wood Nursery previously stood.   This development is known as ‘The Watergardens’ because of its Japanese-style garden, and, thankfully, they still exist, and are maintained by the residents in superb condition.

An additional ‘Chapter’ was published each month over a period of five years on this website under the tag of ‘Where? / Site of the Month’, and these can now be accessed alphabetically under the comprehensive ‘Where? / Gazetteer’ tag, so don’t miss those.   Click on the link to see the complete list of Pulham sites described and illustrated by Claude Hitching.

Another link that you might like to refer to takes you to the ‘Press and Media / Book Reviews’ tag, where you can read all the reviews of ‘Rock Landscapes‘ written by professional critics in the National and Garden Press.

To check out the names of the People and Places featured and illustrated in any of the other Chapters, click the CONTENTS link to return to the main CONTENTS Page.   Click here to go direct to the ‘Book Shop’.   Happy Reading to all our followers

A full description of the work done by James Pulham and Son at ‘The Watergardens’ – together with a number of pictures – can be found in Chapter 33 of Rock Landscapes: The Pulham Legacy – the critically-acclaimed and lavishly illustrated definitive story of the lives and work of James Pulham and Son.   Written by Claude Hitching, with featured photography by Jenny Lilly.   Published by Garden Art Press.