This is a very special ‘Site of the Month’, because it introduces   a previously unrecorded Pulham site that has just been brought to my attention.   I received an enquiry a few months ago from Heather Dyke, whose father, Nicholas Morland, currently owns Court Lodge, in Lamberhurst, Kent.   Heather and her husband, Ian – Fig 1 – recently took over the management of the property, and thought there may be some Pulham features in their gardens, so she wondered if I might be able to help confirm this. 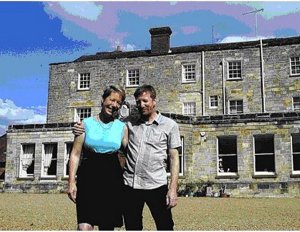 Fig 1 – Heather and Ian Dyke have returned home from New Zealand in 2013 to take over the Management of her family home, Court Lodge in Lamberhurst

Court Lodge has been in the hands of the Morland family for about three centuries, and has been modified and added to several times over that period, and Heather’s great-great-grandfather, William Courtenay Morland (1818-1909), was responsible for some of them.

James 2’s promotional booklet, Picturesque Ferneries and Rock Garden Scenery, published in 1877, contains a list of ‘satisfied clients; and confirms that the firm did indeed do some work for a Mr W C Morland at that address in 1868.   It simply mentions the word ‘Fernery’, and it had not previously attracted my attention because there are many such entries in the ‘Client List’, and a lot of the ‘ferneries’ I had heard of had long since disappeared.

However, from the details that Heather gave me, it was obvious that there was more than just a fernery at Court Lodge that might be ascribed to James Pulham and Son, so Val Christman and I decided to take a trip down there to have a look around.   We were amazed at what we found.

There were walled gardens; a pool that had sprung a leak, dried up and become completely overgrown, and a sunken dell that had apparently been constructed in an old quarry from which some of the original stones for the house had been extracted.   There had also been a small summerhouse, but that had long since gone, and the fact that these features were not included in James 2’s ‘Client List’ indicates quite clearly that they must date from after 1877.   My own estimate of their probable date would be during the early 1880s – say 1883 – when they built a number of similar features on other sites.

It seems that William C Morland didn’t have far to go to get to work, because he was a County Magistrate who attended the Petty Sessions that were held on the second and fourth Tuesday in every month for the Frant – East Sussex – Division.   These sessions took place in the Court House, which was presumably adjacent to Court Lodge.

It is also known that he often visited friends at Blackhurst Park, which is very near Dunorlan Park, in Tunbridge Wells, where Henry Reid had a magnificent assembly of Pulham features, as described in Chapter 5 of Rock Landscapes: The Pulham Legacy.   It is therefore quite possible that he had these in mind when he decided to ask James Pulham and Son to extend Court Lodge by building a conservatory in which to create a fernery for his plants. 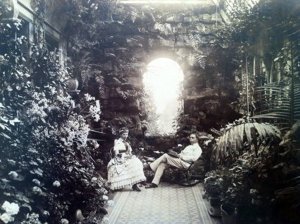 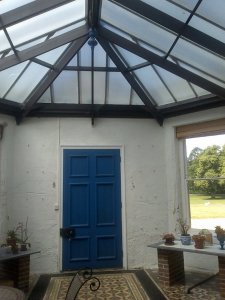 Fig 3 – The Conservatory as it is today – part of it has been converted into a kitchen, and the fernery has been removed, but part of the original Italianate-tiled floor still survives

Fig 4 – A plant pot on a wall bracket in the 1884 Fernery picture, compared with a photo of an old bracket found recently in the gardens.   They are definitely the same, although there are no vases of this design in the Pulham Garden Ornament Catalogue

Fig 2 is from Heather’s Family Album, and shows William’s younger son, Henry Courtenay Morland relaxing in the fernery with his first wife, Alice, in 1884.   Fig 3 shows one end of the Conservatory as it is today – the fernery has been removed, and part of the original room was converted into a kitchen, but the original Italianate-tiled floor still survives, and this is a feature that the Pulhams often included in their ferneries and summerhouses etc. 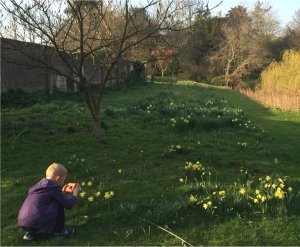 Fig 5 – Heather and Ian’s son, Damian, photographing the daffodils in the Walled Garden 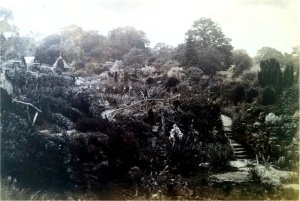 Fig 4 shows a wall bracket in the conservatory with a plant pot on top, together with a photo of a bracket of an identical pattern found recently in the garden.   The pot is a puzzle, however, because there are no similar ones illustrated in the firm’s Garden Ornament Catalogue published c1925. 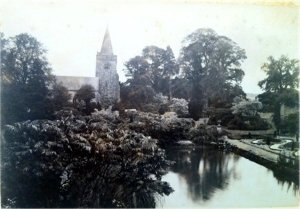 Fig 7 – Looking across the pond towards the Church c1884 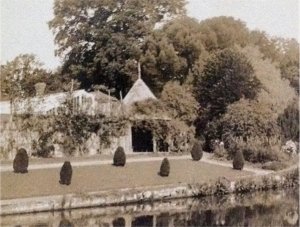 It is possible that the Walled Gardens were also built in 1868, because the Pulhams built several of them around this time, although very few got mentioned in the Client List.   Fig 5 shows Heather and Ian’s son, Damian, in the Walled Garden taking photos of the daffodils in the Spring.

There used to be a quarry at Court Lodge, from which stone was taken with which to build the house, and it could well be that, during the early 1880s, William C decided to get Pulhams to return and convert it into a sunken garden – something else that they had done at other properties. . Some other pictures from Heather’s album are dated c1884, and one of them – reproduced here as Fig 6 – shows how the sunken garden looked then.   A flight of rustic steps leads down on the right, and the tops of some greenhouses and the pointed roof of a summerhouse can just be seen towards the left centre.

Fig 7 dates from the same period, and this one looks across a pond towards the church in the background.   A corner of the Walled Garden can be seen on the right, beyond the path and the border, and a Pulham vase can just be seen a little further down the path.   The sunken garden is behind the shrubbery at the far end of the pond, at the opposite side of the path from the vase. 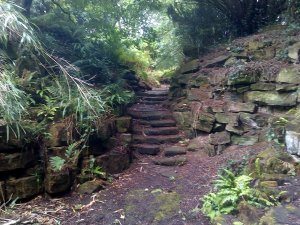 Another view of the pond – this time dating from c1905 – is shown in Fig 8.   This was taken from roughly the same position as that in Fig 7, but looks back towards the summerhouse and greenhouses that are just visible in Fig 6.

Sadly, the pond sprang a leak at some point in the past, because it is now totally dried out, and overgrown with rushes.   There is a path running down between the pond and the sunken garden, and my theory is that water would have been piped from the pond, under the path, and along the top of the bank of the sunken garden to a small cascade in its centre.

Fig 9 shows the steps leading down to the floor of the dell as it is today, and there is a pathway from here that is flanked by some Pulhamite rocks.   This leads to a clearing in the centre, just below the point in the bank where I imagine the cascade would have been, and I think there could have been a pool in the centre where there might have been a fountain at some time.   If my reasoning is correct, the water would have been pumped round from the top pond; along the pipe to the top of the cascade; down the bank into the pool and fountain at the bottom, and back to the top pond.   However, it would probably take a considerable amount of work to prove whether or not this theory is true. 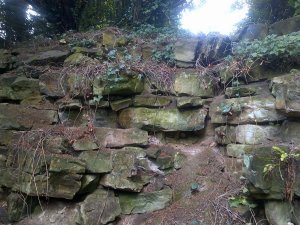 Fig 10 shows part of the bank as it is today, whilst Fig 11 shows the rusticated steps leading out of the garden.

William Morland died in 1909, and Court Lodge passed to his eldest son, Charley, but Charley had no children, so, on his death, it passed to his younger brother, Henry Courtenay Morland – Heather’s great-grandfather.   It then passed on to Henry’s eldest son, William, who also had no children, so it was then inherited by Heather’s father, Nicholas, in 1981.   He still owns the property, but Heather and Ian have now taken over its Management. 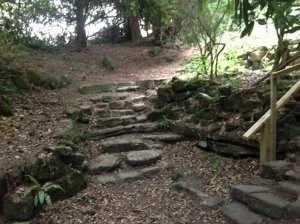 ‘We have so many plans, from weddings to educational and garden visits,’ she says.  ‘But our first priority is to restore the grounds.’   She has spent many hours researching the six-acre site, and is putting together an application to the Heritage Lottery Fund to help finance the restoration of the gardens to their original condition.  I was able to put her in touch with NADFAS, who are very interested in helping with archival research etc, and are keen to get involved in the project.   I really do hope that her application will be successful, because these gardens must have looked absolutely superb in their heyday, and deserve to be helped back to life.   A lot of work and expenditure lies ahead, but it will all be so worthwhile in the end – not to mention a great tribute to Heather’s tenacity and determination.