John Walter II, the then chief proprietor of The Times newspaper, purchased the 8,000 acre Bearwood estate in Wokingham, Berkshire, in 1816, and commissioned William Gilpin to landscape the gardens between 1819-20 – a commission inherited by David Stewart c1822.[i]

Fig 1 – The three-tiered waterfall at Bearwood

John Walter II died in 1847, and was succeeded by his eldest son, John Walter III, who also inherited his father’s interest in The Times.   He rebuilt the house, using Robert Kerr as his architect, and employed James Tegg as Head Gardener.   Mr Tegg was responsible for adding a number of new features to the gardens, including the planting of the Wellingtonia Avenue; the layout of a new kitchen garden; the sunken hardy plant garden – or rock garden – near the house, and the gradual extension of the pleasure grounds in various directions.[ii]

There used to be an unsightly old clay pit near the house, so Mr Tegg contracted James Pulham and Son to convert it into ‘something more pleasurable to the eye’.   The work started in 1879, but may have been done in two phases, because it is known that Pulhams returned in 1885.   An article in the Gardeners’ Chronicle dated 29th June of that year provides an interesting view of what it was like at that time:

‘ . . the entrance to the rockery is marked by an imitation rocking stone.   Here, out of a bed of clay – or rather what was once a huge ugly hole – has been formed, at no inconsiderable cost, certainly a very charming arrangement of rock, cascade and rivulet, and, associated with which, is seen some decorative gardening as well as much that is rugged and natural.   This rockery is one of Pulham’s efforts, and presents a most interesting feature, showing in what way even the ugliest holes may be converted into artistic and pleasing objects.   The rockwork is planted with an interesting variety of suitable plants – rock roses being especially prominent.’

This is certainly not one of the Pulhams’ largest or grandest sites, and the general layout is essentially quite simple, with water being pumped to a waterfall that fed a stream running through the bottom of the gully, alongside a rock-bordered path.

The garden became almost completely overgrown over the years, but, by the time of my visit in the summer of 2000, it had undergone a commendable amount of clearance and restoration, done partly by some of the older boys at the school under the direction of the Second Master and his wife, who are both keen gardeners.   They had done very well indeed, although they had by no means completed the task by that time, and indeed it was still In a very overgrown state in 2010. 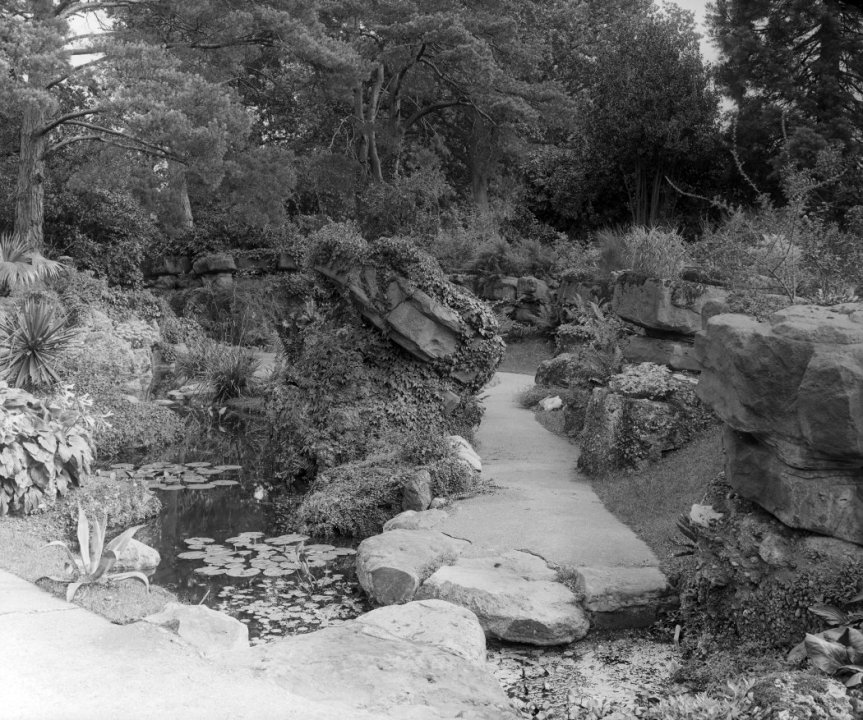 It was not possible to save absolutely everything during the clearance of 2000, because tree roots had taken their merciless toll on quite a lot of the rocks along the edge of the stream and elsewhere.   Fig 1 shows what could then be seen of the waterfall, which cascades over three levels to the stream below – there is a pump installed somewhere, but it had not by that time been discovered, so a hosepipe was used as a temporary water source. . .

Fig 2 is taken from an issue of Country Life dated 15th March 1902, and provides a good idea of what the rock garden – or ‘Water Garden’, as it was then called – was like at the beginning of the 20th century, compared with what it was like nearly 100 years later, as shown in Fig 3.

One of the most impressive features of the garden, however, is the massive ‘tilting rock’, or ‘imitation rocking stone’, as it is referred to in the Gardeners’ Chronicle article quoted above.   Made to simulate a massive geological fault in the rock strata, one is tempted to wonder how the ‘tilt’ is retained without the ‘rocks’ collapsing onto the path.   The 1902 view of this is shown in Fig 4, while Fig 5 shows it as it was in 2000.

[i]     Register of Parks and Gardens of Special Historic Interest – Ref: GD1380